Things are rolling along.....

Okay, okay, I am still on this side of the lawn.  I know it has been a while since I posted, but I have a really good excuse - Howie.  We got a dog.  After two years are looking, researching, trying to find (and been rejected by several "rescue shelters"), we got a puppy flown in from Pennsylvania.  His name says it all.  He is a good pup, afraid of nothing, and in love with all of us.  Pic below....

As for the rest of us, things are normal.  The medical bills are rolling in and I am calling saying, "Why did a blood draw cost $2000?  Right.....I think that should be rebilled also...thanks."  And then others I am like, "Damn, I DO have to pay that one."

The boys are doing great.  Mason has REALLY good grades....like, REALLY good grades and I was a little stammered by it.  He is always been a smart kid, but all As?  I asked him about it and he said, "I stopped fighting about what I had to do and just did it."  Well, yeah, and there is that.....lol.  He is still in Hockey and spending more and more on goalie equipment.  I am fearful, of not only Swedish Hospital mail right now, but the Mastercard bill.  In his last game, he took 37 shots on goal (that is like three times a bad game).  He let two in, but they won 3-2.  He said it was the equipment with a smirky (sp) smile.  I responded with, "Yep, no talent there - just equipment....."  Queue eye roll.

Nolan is doing very well also and I am happy to say, the Highly Capable Program suits him.  He is finally challenged enough to not "help others (disrupt class)", or try to convince the teacher he should teach the lesson because coming from him it will be easier to understand.  Yeah, that happened.  He even told her it was her opportunity to get more coffee.  I think he gets it from his Dad.  ;)  His Flag Football team struggled this season, but they won there last game last night with flying colors.  They really played well and there were all over the moon.  Party on Thursday night.

Grant is working, working, working.  Our dryer mystery has finally been solved after vent cleaning with the dryer vent for "free", maintenance, a "new" dryer from OfferUp for $85 dollars and a REAL DRYER VENT CLEANER DUDE THAT DISASSEMBLED THE VENT ON THE ROOF AND TOOK THE SCREEN OUT THAT SAID, "REMOVE THIS SCREEN IF THIS IS A DRYER VENT."  Brilliant.  Oh, then we had rats in the crawl space.  Definitely, afraid of the MasterCard bill.

Howie's first day after the flight, dog park and bath.... 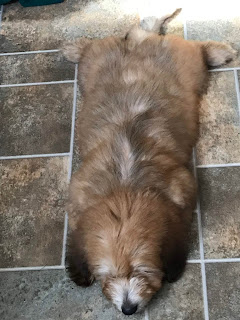 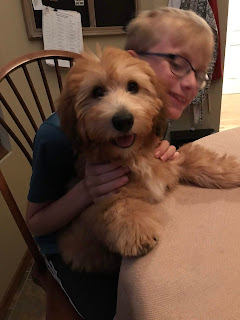 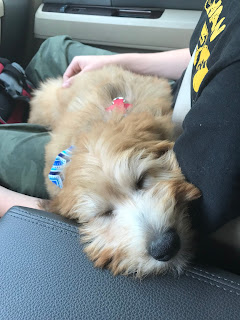 Posted by Angela Clarno at 2:49 AM

So much to be happy about. Mr. Pooch is adorable! Hugs to everyone. Love you!!! xo

Its about time you got a dog!!! I am very happy for all of you. Keep being strong and know that you, the family and mom will be missed at Thanksgiving.

Hi Angie
Love the pup. He will give you so much joy.
You are still in my prayers.
Hope this year is a good one.
My best to you and your family.
��Karen

Best Metrovac Pet Dryer for canines and different creatures. Dog Grooming Dryerare worked in the USA with amazing segments and all metal lodging. In contrast to plastic dryers, they won't liquefy or split.

Additional antler cleaning might be necessary in your specific environment. To learn more about deer antler dog chew, visit on hyperlinked site.

A whistle, clicker, training lessons and barking sounds in one single app for you.