Life is going fast these days.  The kids are ready to get out of school, Nolan understands Peter "the pan" likes being with other pans at night, and I have a birthday on Sunday.  I always get, not melancholy, but very pensive during this time.  My after my birthday in 2007, I started chemo for the first time.  In 2008, I was at the Kent Relay for Life, recently in remission, and walking with Bob.  It was the last time I would see him.  On my 2009 birthday, the nurses pulled the last chest tube from me after bilateral lung surgery.  (I can still feel that.  It takes your breath away.)  In 2010, I celebrated my birthday in remission.  In 2011, I was finishing up chemo right after my butt surgery and in 2012, I was back in chemo.  Today, I am in complete remission.  The American Cancer Society's pitch is "More Birthdays".  I have a special fondness for the Relays.  I have been honored in so many and my list of luminaries gets longer every year.  However, Kent is probably the most special.  This year, like last year, my girlfriend's son, Stewart, is leading the "Royal Runners" Relay Team at the Kent Relay for Life.  He is waging an uphill battle as Prom was scheduled on the same Friday night.  So, he is working with half of his team and missing his own senior prom, but still going strong!  His Mom is even baking and frosting sugar cookies for student fundraisers (I get one with Brown Frosting - cool right?!?!?!).  Quite a team!  If you click on the link, you will see me in the picture from last year. I am going to be giving $50 dollars to this relay and I am asking you to give what you can.  $1000 is made up of 50 $20 donations.  Tomorrow, Thursday, I will be at the cancer center helping a friend of over 20 years get through her first chemotherapy.   She needs more birthdays also.  Friday is the Relay and I would love to see him reach his goal of $1500...please donate for all of those who have fought, waged, won, and lost, to cancer.  Here is the link...

Peter "the Pan" and my scan results

A boy and his pan

Nolan has always loved to be in the kitchen.  His first blisters were when he was old enough to stand at the stove and I was make a pot of pasta sauce and he tried to look inside grabbing the side with both hands.  Doesn't matter how many times you tell them, but once they burn their hands, it don't happen again.  Well, for the past two weeks, I have had to watch the Bialetti Aeternum video on the Bed Bath and Beyond website.  It is ceramic cookware.  Finally Nolan insisted on buying it.  I told him he could not buy a set.  He protested, so we went to the store and he got to feel all the pans.  Clearly, the 8" fry pan was the only one he could hold with one hand (his requirement).  "Do you have a coupon?"  Why do they ask me these things?  I said, "Use this one, it is the best for this purchase."  He read the directions with Dad and "made" lunch.  Pasta with Peas.  The pasta was already cooked so it was about cooking frozen peas in A LOT of butter and adding pasta.  Dare I say, but it was good.  Usually we add LOTS salt.  For dessert, he topped sauteed marshmallows with cinnamon sugar over ice cream.  When he wanted to do cookies, I said, "Sweetie, you can't bake with that pan."  His response was a firm, "That's a bummer."  I have to say it has been a good distraction for me...scan is tomorrow and I have been a little on edge.  He slept with it last night and 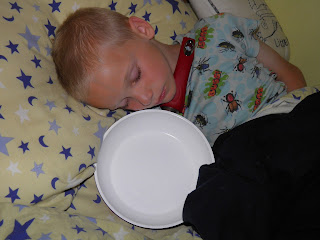 Have you ever watched the "Amazing Race"?  At the end they say, "Twenty nine days, 17 countries,.......you have won the Amazing Race!"  So.....49 days, six subcontractors, five LARGE checks, 52 decision, five additional work authorizations......you are the winner of a NEW LOFT AND SECOND BATH!"  We are home.......Mia - thanks for the Welcome Home sign on the garage!

First, thank you for all your wonderful comments.  Apparently, living with my parents 20 minutes from school, two parent surgeries, one remodel, one spring break, and getting elected to Co-President of the PTA keeps one busy.  In addition, I did not have easy access to a computer with a REAL keyboard and I am not talented enough to do it all with one finger on the iPad!

I could blog about the last seven weeks for about 52 pages, but I someone (probably God) blocked direct access to a real keyboard to save you, the reader.  So, I will give you the highlights.  Spring Break - Grant, I and the boys went to San Diego.  We have learned we need to get to sun during the nine month blah period in Seattle, so when I saw that we had a Spring Break, I bought tickets to San Diego.  We had rough plans, but nothing we couldn't change.  Here is how it went:  Landed in Long Beach, got our car, went to Anaheim for two nights.  The idea here was to go to California Adventure to see Cars Land.  We arrived late on Sunday night, there was a McDonald's next to the hotel that was RIGHT across the street from the Disneyland Gate.  Check in, get food, bathe, fall asleep.  BTW- my kids are snobs.  They went in the room and said, "This is where we are staying?!?!?!?  Isn't it a little small?!?!?!"  Over "dinner" we explained to them that this was a great place since we were staying in the room for about 16 hours and that MOST people would be happy for it.  It was a clean room with comfortable beds, a very nice pool, free breakfast, right across the street from the gate!  (Since Mason and Nolan were born we have always stayed in the Resort because of my energy, proximity, naps, etc.....that CLEARLY must change.)  Mason and Nolan just looked at us and Nolan said, "Is the room in San Diego better?"  Grant and I rolled our eyes and changed the subject.  California Adventure was amazing and a very cool thing happened.  We went over to the "Soarin' over California" ride to get a fast pass.  The Fast Pass time was smack during the parade.  Since we only had one day, we had to choose - Parade or Soarin'.  While we were standing there discussing it, a worker approached us and asked how many were in our party.  We looked at her like, "Whaaa?"  She said, "Your son just helped me out and here at the Resort we like to reward that behavior, so I was wondering if you want to go on this ride right now?"  "YES!  Wow, thank you!"  I look at Mason assuming it was him and he smiled, but the worker corrects me, "No, it was this one."  Nolan?  Are you kidding?  Okay, REALLY disturbing that I looked at Mason and he was willing to take credit - note to self!  Nolan basked in the glory of it all and, really, he deserved it.  We didn't have to choose and we got to see everything because of a little kind thing he did.  I knew he had it in him, I just was not aware he was openly sharing it with others.  San Diego was awesome.  The hotel provided free full breakfast (including waffles) and dinner which included ice cream.  The boys were thrilled!  Hotel accepted.  Legoland, Seaworld, the Beach, but the most surprising thing we did was the USS Midway.  I had NO idea that it would be so much fun for the family.  We did the Family Audio Tour and the boys filled out their "Wings Certificate".  We had lunch there.  They serve beer - BONUS!  We practically shut the place down - not the bar.  Before our flight back, we saw some friends we had not seen in over ten years.  Nice visit and then off to the airport, where our flight was delayed.  OMG - people are bizarre.  So, there was something wrong with the plane and customers started demanding to know what like they could help out.  Grant and I were like, "We would like the ENTIRE plane working, fixed by people who know what they are doing, so we will happily wait."  Others immediately got on the phone or computer looking for other flights.  One person was on the phone saying everyone at the airport was "freaking out".  If her definition of 'everyone' is her, then yes, that was a valid statement.  The flight was an hour and a half late.  BIG DEAL.  San Diego - one of our best vacations yet.  Then back home, well, Grandma and Grandpa's house.  The boys were getting tired of being away.  Grant was getting tired of being split.  I was just tired....then Grant picked up my prescriptions and they forgot to give me my hormone.  I was out of my hormones.  See, I take three prescription regularly and an anti anxiety sometimes.  The first is my blood thinner - two preloaded shots everyday; morning and night.  Long term chemo leads to blood thickening.  The other two are a "cocktail" because as you may remember I was VERY sad about two years ago, saw the cancer psychiatrist  and she came up with a combination of hormone and anti-depressant.  Her explanation was chemo has killed all of my hormones and long term effect of chemo on the brain just is not studied and documented yet.  I think that is because we are SUPPOSED TO DIE. :)  It was Friday.  Pharmacy is closed until Monday.  I missed Friday, Saturday, Sunday, and finally took them on Monday night.  I thought I would be fine.  I was FAR from fine.  And then I got the flu.  Further from fine.  I was a mess.  Two sleepless night, more crying than I can tell you, a husband that would hold me even when I didn't want to be held, and 8 lbs later, I was on the mend.  I am not EVER going without those again and Grant will never make that mistake again.  Poor man.  Last highlight....when you go back to your parents house, you remember things.....like my Dad clipping my nails as a kid.  OUCH!  I used that so much with the boys that when Nolan and I were talked about fears he said, "I know your biggest childhood fear - GRANDPA CLIPPING YOUR NAILS!"

Since we have been home, we are moving back in...hanging pictures, shuffling, redecorating  which will continue into this weekend and next week.  All I do is try to have one more room NOT look like a bomb went off in it.  It is slowly coming together.  I am sleeping like a baby again.  My boys are sleeping better too.  Our smell is coming back to the house which is neater than you think.  The windows have been open this week and the lilac is blooming right next to the window.  I saw Shelly (cancer buddy) who I haven't seen in MONTHS as I was going to acupuncture and when we realized it was each other, we hugged like we had come back from war.  Which we have.....  And with my life on pause for the remodel and taking care of my folks, I return to my life and my cancer and my scans.  Saw Hank on Tuesday; scan on the 21st.  Exhale, pause, breathe   I am home.  Happy Friday and to all the Mother's our there - Happy Mother's Day!  Love, Ang
Posted by Angela Clarno at 9:13 AM 3 comments: