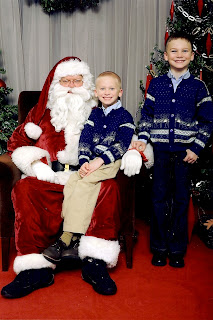 Christmas is almost here.  The oven is preheating for the cookies.  The advent calendars (traditional, lego and online!) are all up to date, the lights are up the presents are wrapped, so let the festivities begin! This will be my second Christmas no in treatment.  Wow, who'd a thunk it?  I certainly didn't.  December has been busy and I have experienced some fatigue, but not much.  It has, for the most part, been great.  I took the boys to their first real big time musical, Elf.  We went with Grandma and Auntie Donna. They loved it and they were darn good.  As I was walking back to the car with them, I wasn't holding their hands with a death grip, I was following them.  They were discussing the play and video games to each other.  That is when I realized - they are little men.  My babes have shed.  Their legs are long and think about things and have opinions.  They can reflect on their behavior and school work when it is time for allowance.  They can negotiate and it is not SOOOO ridiculous.  They get jokes and understand teasing, well, most of the time.  Some funny things that happen this month:  Mason desperately wanted to go to the Nutcracker.  They discussed it in school, listened to the music, etc.  He knew the composer, Tchaikovsky, and everything.  So, he and I went.  Nolan happily stayed with Grandma and Grandpa.  Girls in dresses?  Men in tights?  NO THANK YOU!  After it was over, and we had finished our Mouse King Cookie, he told me that he thought there would be more talking.  I said, "No, not in ballet.  They tell the story by the dance.  That is why we read the story in the program before each piece."  Oh.  I figured he hated it, but he asked to go the gift shop and there he insisted to on purchasing a Nutcracker. Not the small one, by the way, the regular sized one.  He asked if he could borrow the money and he would pay me back.  Since I know he is loaded and never spends his money, I agreed.  I said, "You must have liked it if you want to buy this?"  "I loved it!  It just would have been better if there was a little talking."  Okay, well, let's fill out a comment card....NOT.  We then went to the Center House and watched the Christmas Train and headed home.  A date with my eldest.  What a perfect day.

Now, for Nolan, well, he is five.  He loved Elf, but thought it was a bit too long.  He loved dinner after Elf and decided to split dessert by five; however, the pieces were not close to even.    There were four small pieces and then a huge chunk left for him.  When that didn't work, he just ate as fast as he could.  I do not think Donna got any.  She was still explaining the unfairness to him when he took the last bite.  Nolan also learned how to play the card game WAR.  Nice and appropriate for the holidays, no?  He very nicely invited me to a game and had dealt the cards and everything.  I played and then realized that they deck was loaded in his favor and when I mentioned it to him he said, "Mommy - I gave you an ace!" ONE ACE and all the twos, threes, and fours.  THANKS.  I explained how many things were wrong with the whole thing, but it didn't seem to do anything.  He has pulled many into his web, including Grandpa, but now, no one will play with him so he loads his deck, has three other piles of cards on the table and "plays for you."  Shockingly, he always wins.  After I told him that all of these actions were not what Santa was planning on - not sharing dessert, cheating, etc., he came to my room in the morning crying convinced he was going to get coal in his stocking.  We talked about the good parts of coal (which is a short list) and how maybe we can turn it around before Christmas.

Oh, and then there was the moment of truth for each of us.....Mason and Nolan had be playing football in the living room.  When I asked if anything happened with the candle spilling, Mason and Mia said, "No."  I believed Mia, but Mason was shifty.  The next day I asked Nolan and he sang like a bird (trying to not get coal and turn around his behavior).  Mason and Nolan were playing football and the ball landed in the candle.  Mason was FREAKING out.  I told him that he wasn't in trouble, I shouldn't have put a candle there or lit it!  But, I also told him that lying to me was a bad idea.  I said, "I am your greatest ally, your greatest warrior, teacher, and guide.  I will love you always.  Do you want to screw all that up by lying to me?"  And, advice from Mother to Son, bites Mother in the ass.  Two days later, "Mommy, I have a question and you have to tell me the truth."  In a flippant way, I said, "Okay."  "Are you Santa?"  FRICK!  Paying attention now, "Do you think I am?"  "I don't know.  Everyone at school says their parents put the presents under the tree.  So, do you?"  I get quiet.  Pause.  "Mom?"  "Yes?"  "Tell me the truth."  "Mason, is it that you can't see Santa?"  "Kinda."  "Well, you can't see God or Jesus, but you believe in them."  "Oh!!  I get it!  (whew) Then, people that don't believe in Santa, don't believe in God or Jesus."  DOUBLE FRICK!  "Mason, NO.  Okay, truth.... it is complicated.....but I have something to read you....something a friend emailed me and I agree with it....."  So, I read a letter that a parent had written to her child about Santa.  A girlfriend from my bookclub had emailed me a couple years ago.  I have I kept it.....here is what I told him from that letter....

I am not Santa. There is no one Santa.
I am the person who fills your stockings with presents, though. I also choose and wrap the presents under the tree, the same way my mom did for me, and the same way her mom did for her. (And yes, Daddy helps, too.)
I imagine you will someday do this for your children, and I know you will love seeing them run down the stairs on Christmas morning. You will love seeing them sit under the tree, their small faces lit with Christmas lights.
This won’t make you Santa, though.
Santa is bigger than any person, and his work has gone on longer than any of us have lived. What he does is simple, but it is powerful. He teaches children how to have belief in something they can’t see or touch.
It’s a big job, and it’s an important one. Throughout your life, you will need this capacity to believe: in yourself, in your friends, in your talents and in your family. You’ll also need to believe in things you can’t measure or even hold in your hand. Here, I am talking about love, that great power that will light your life from the inside out, even during its darkest, coldest moments.
Santa is a teacher, and I have been his student, and now you know the secret of how he gets down all those chimneys on Christmas Eve: he has help from all the people whose hearts he’s filled with joy.
With full hearts, people like Daddy and me take our turns helping Santa do a job that would otherwise be impossible.
So, no. I am not Santa. Santa is love and magic and hope and happiness. I’m on his team, and now you are, too.

Mason took it well.  I told him that we cannot tell any of this to Nolan.  Part of our job is to let him have the magic until he can understand it.  "I promise Mommy."  And, he has done a wonderful job.  My babes have shed.

May your Christmas be everything you hope and dream about and may your New Year be a healthy one! 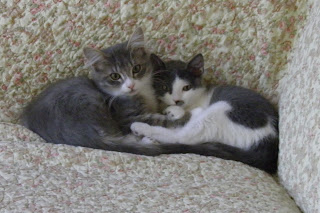 Well, life is ticking along.  The first two weeks of remission I slept for most of them.  SERIOUSLY.  They told me the fatigue would come after two weeks and I was thinkin', "WOW, this is going to be bad!!!!"  The at the two week mark I was in great form.  When Hank asked me if I was fatigued, I replied with, "Yeah, for the first two weeks, but now I am fine.  I don't think those people have ever had chemo.  Not that I want them too, but that is FATIGUE!"  He laughed and told me that he would see me at my next scan - that is like Feburary......YIPPEE!  Got some other doc things going on...always do....fixing me from what all this has done to my body, but since I have a couple boundaries left, I am going to keep those to myself.  The house is good, I love cooking again, Molly Moon (kitty) is finally growing into her ear hair and Hannah has finally forgiven me for declawing her (after she climbed up my robe and was SOOOOOOOO proud of herself).  I am taking Mia again after school on Mondays-Wednesdays and all seems to be restored in the universe.  I was listening to the boys in the bath a few nights ago and they were saying, "Who is the one that makes all the decisions?  You know all the laws?  Oh, I can't remember, it is a girl.  The President?  No, that is a boy.  What is she called?????  A Secretary????  YES!  That is it!  A Secretary!"  Not so slow after all, those two!  Anyhoo, Mason's birthday was last Sunday.  He told me it was the best day of his life and I think it was!  One of the Mom's that came did little video.  It is better played on a PC, iPads and iPhone won't play the music.  Turn up your speakers and enjoy!  Love, Ang  Cut and paste this link in your browser....