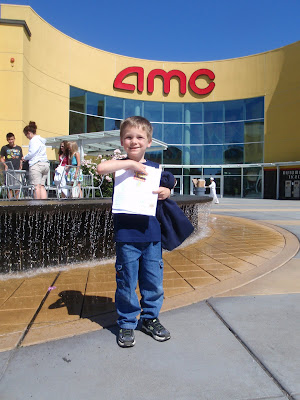 So, a few months ago, Kari, a friend of mine, emailed me this AMAZING DEAL where between coupons, membership rewards, etc. you got Toy Story and Toy Story 2 movie for like $8 each (including a Blu Ray Disk) and two FREE movie tickets to Toy Story 3. I didn't understand the email she sent me at first and emailed her back saying I was going to pass so I don't need the coupons. She, who is like me with the "deals", called me and said, "I am sorry, you must not understand what an amazing deal this is and I am not going to let you pass on it." She was right. So, after watching Toy Story and Toy Story 2, I took Mason to his first movie at the theater on Saturday. We even went to the 3D version with the glasses and everything. Okay, I should give you a bit of history. I LOVE THE MOVIE THEATER. I used to go ALL THE TIME, but what else was there to do in Burien growing up besides sports and movies?!?!?! I went in college a lot too and then I met Grant. Grant doesn't like movies because they are not interactive. If you know us, your head should be tilting to the left in total confusion. He doesn't like movies because they are not interactive enough and I love movie because, with that logic, they not inactive. Yep, it's a head scratcher. I can count ON ONE HAND how many movies Grant and I have seen in the theater. Sixteen years this October we have been married. Anyhoo, so I am with Mason, telling him the rules like pee before because we ain't leaving the movie, NO TALKING, no getting up, NO TALKING, no kicking the seat in front of you, NO TALKING, etc. I was taking pictures, we bought snacks (I never buy snacks!) - we were all set. Mason did AWESOME. The only time he spoke was right at the end when he was so into the movie he had NO IDEA he was in a movie theater. He said, "Is he going to leave him????" Everyone around us was VERY sweet because it was a tender moment and Mason is my tender child. I had a great time. Over the past week, I felt better and better, I got out of my pity party/depression that I have to do this (chemo) AGAIN, I went to the Nordstrom Anniversary Sale and bought BROWN jeans (what were the chances of BROWN JEANS being the rage THIS SALE??!?!?!), and really got my groove back. If I am gonna do this, I am going to do it both hands up and fightin'. So, I was having a blast at the movie. I had never been to a 3D movie and was SO FUN! I was happy to be alive, lovin' the fact that Mason was lovin' movies in the theater, and then I crashed. WHY DOES THIS ALWAYS HAPPEN?? Toy Story 3 is the last of a trilogy about Andy and his toys. In this movie Andy is going to college and he has to decide what to do with his childhood toys. So, there is a scene when his room is all cleaned out and Andy's Mom comes in and exhales. She realizes that he is leaving and what that will feel like. And there is it - the reason I wear waterproof mascara ALL THE TIME. Will I ever get that moment? Will I ever get the opportunity to feel that? What college will he go to? What will it be like? What if I am not there? How will Grant deal with it? Grant needs me to help him. I slowly look over at Mason who is happily munching on his popcorn, I close my eyes, wipe the tears, grab his hand and go back to the movie that is very touching, the moment that is precious, and the memory-in-the-making of Mason's First Movie. Happy Monday, Ang
Posted by Angela Clarno at 9:32 AM

Wow...you really know how to make a person cry. My first cry of the week. Thanks for sharing.

Love it!!!! We were at that theater on Saturday, too! Glad Mason loved the movie and you both loved the experience. What a wonderful memory to have. The picture is great!
Hugs, Dawn

Wow...you are such a story teller! Of course you are going to make it to all of those moments...you are ANG!!! Glad I forced you to buy the deal! Love you lots!

That scene was a tear jerker for me, too. GREAT MOVIE. But I have only the excuse of being an overly emotional mama (as opposed to your supremely rational mom-cum-cancer-kickin'-badass). You're allowed to feel the way you did. And we all love the example you set of living your life and parenting your children with humor and exuberance. It's beautiful to see you in action. xoxoxo
Laurie