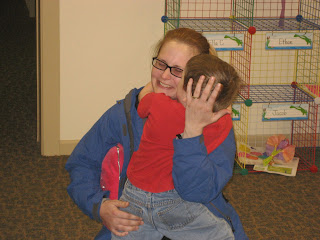 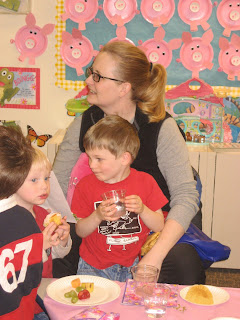 What a trouper Mason is. I haven't seen him in a week. I have talked to him on the phone, but I have not seen him in a week which is the longest I have ever gone. Leading up to the surgery, I was coaching him especially about how we were going to be separated, how he needed to be a good example to Nolan, how we were so very lucky to have the support that we have and that instead of feeling sorry for ourselves we need to be thankful for our situation. Well, apparently, he listens really well. Karissa picked me up yesterday. Nolan was in the car and would not give me the time of day. You see, to Nolan, ignoring me is he way of punishing me for leaving him with someone else. He is two and it is all about him. He wouldn't hold my hand as we walked to Mason's classroom, he wouldn't give me a hug - nothing. Knowing him, it didn't bother me too much and I looked on the bright side too. I didn't have to change his diaper and when we was covered in cupcake he started yelling, "Karissa!!! Karissa!!" I did reply to that one with, "You know dude, she isn't your slave!!" and I cleaned him up. We got there a little early and I got to chat a bit with the teachers and parents before the performance. Everyone was, of course, very generous with their praise of me. "You look great!" "I didn't think I would see you for weeks!" "What a trouper you are!" I responded with, "Karissa made this happen. I just showed up." And it is true. She called me, she made it easy, she drove around, back and forth, up and down so that I could go to this performance. Believe me showing up wasn't the hard part. One of the teachers said that every time they referred to the "Mommies" coming for the performance, they would hear Mason either front and center or from the back corner of the room clarify, "And Karissa!" Mason didn't know I was coming. We made it a surprise so that if something went wrong he wouldn't be disappointed. So, after chatting with everyone, one of the teachers came out and asked if I wanted to see Mason before, you know, to get the surprise out so that he could focus on his performance. I agreed and they brought him out. He saw me and blinked. It was like it didn't compute with him. Mommy isn't supposed to be here - Mommy told me so. I explained that the doctors thought it would be okay to come for the performance wasn't that nice of them. He said, "It sure is!" I tried not to cry, but that didn't work. I hadn't seen him in a week, smelled behind his ears, hugged him, kissed him. I got myself back together before he had to go back in to perform. The performance was great. They sang four songs. One included him signing "I love you." to me and he did it directly to me. We had a snack afterwards and he was glued to my side. I read him a book, held him, smelled behind his ears, and savored the moment. Nolan? Yeah, he was somewhere playing with the big kid toys - whatever. He had Karissa!!! After class, Mason asked me if he was going home and I clarified the schedule to him. I told him that he would be with Daddy all weekend, I would see him on Sunday, and then all of us would be staying with Grandma and Grandpa. While he was not thrilled with the info, he bucked up, exhaled, and told me that if was okay because he had to go meet Quinn (Karissa's eldest son) at the bus and he would see me later. They dropped me off at home (so that I could go back to the doctor's) and off they went. Nolan ended up giving me a kiss Goodbye that was more kind than, "See ya later loser!!!!" and when I said goodbye to Mason, he gave me a big kiss and hug. I told him to tell Grandpa that he sang beautifully today and he got shy. I said, "Mason, say it." So he said, "I am beautiful today." I smiled and said, "Yes, yes you are." I waved good bye and my visit was over. I would see them in a few days. As the adrenaline left my body, the pain in my back set in and my fatigue returned. Yes, my visit was over, but I was the one he pointed to when he signed, "I love you." It was me. I was there. Happy Friday, Ang
Posted by Angela Clarno at 4:21 AM

Oh the tears are streaming down my face. I'm so glad you got to see that precious show and see your boys. Rest now and soon, very soon you will all be back together.
You are amazing.
Your unmet friend

Ang, reading this post made my cry! Love the "Mason/Mommy Reunion" picture! You're such a great Mommy and I'm so happy you got to be there for Mason's performance. Thinking of you often and wishing for the speediest recovery for you. Have a HAPPY MOTHER'S DAY with your family on Sunday. Hugs, Dawn

Ang, if you are proud of your children, you have done a great job with them!!!
Happy Mother´s day!!
GGM

Happy Mother's Day Angela. You are blessed and a blessing!

Wonderful story! Thank you for sharing. The photo of you hugging sweet Mason says it all. Lots of love to Karissa for her generous heart and her unflagging support; she is a gem. A very happy Mother's Day to both of you and Sharon, too. Now off to wipe up my mascara smears. Rest up, sweetie. I love you.

Hi Ang,
And that is why I wear waterproof mascara. Love the pictures and the words you write as the tears continue to roll down my face. Have a wonderful Mother's Day!

And I made the mistake of checking your blog while I was in a conference room full of people. I immediately felt tears welling up and I had flip back and forth and read little pieces at a time to keep from bursting into tears. That picture of you and Mason hugging is one to cherish forever. Happy Mother's Day! I don't think anyone could ask for a better gift.

God, I am such a blubbering fool! I was just winding down for the evening when I thought of you and checked your blog! Damn it girl...I haven't cried all day and now I end it with this??? Seriously...you are such an inspiration and I just applaud you for your awesome attitude and outlook during these very challenging last 2 years! You have fought like no other...and guess what? YOU ARE WINNING THE FIGHT! Way to go Ang! You have yourself an awesome Mom's Day! Mason and Nolan are very lucky boys.... Love you lots! Kari George :)

Just checked your blog this morning and am happy to start my day with a red nose and puffy eyes! I'm so happy for you that you felt well enough to go to Mason's school (a big thank you to Karisa). Childhood days go by so fast and are so precious. Have a wonderful Mother's Day, dear Angie and to your mom too.

Where are those tissues???

Nolan seems to have slipped up. There might be a slight crack in his cool, aloof facade. He appears (in the picture of the Mother's Day celebration) to be eating treats... almost... within touching distance of his mommy. Hmm?

Love to Angie and all Mom's
Jane

Happy Mother's Day, Ang - what a perfect gift! For you and for Mason. Soon, soon...this will all be behind you and along with the memories of the hard times, you'll also have these perfect little moments to cherish.